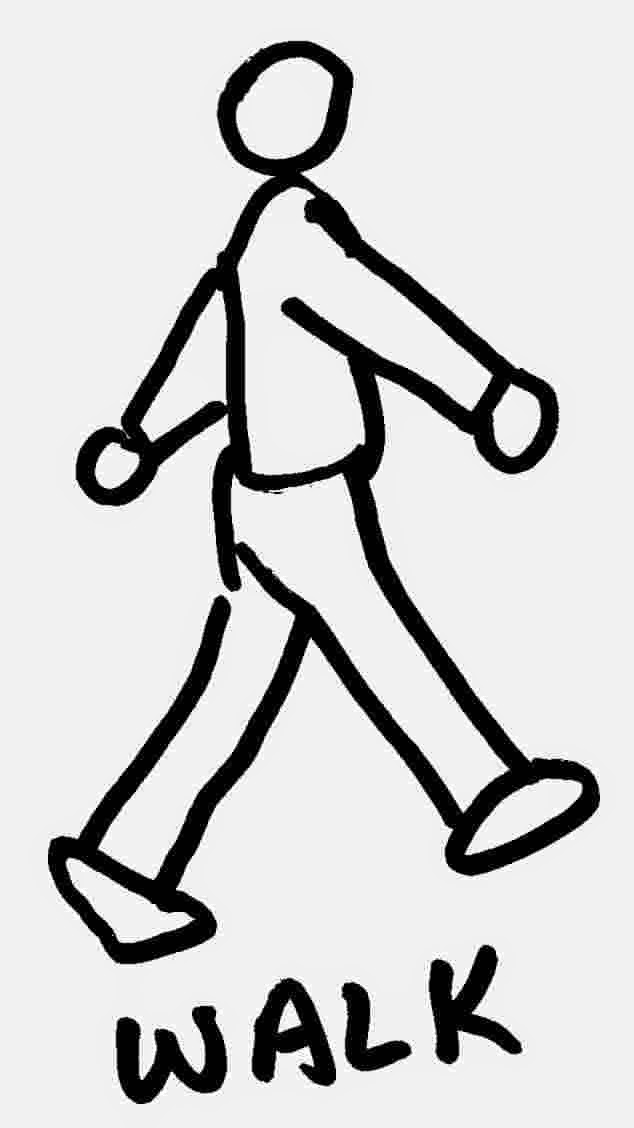 While I was away, I read some interesting articles about the relative benefits of walking and running. This was of interest to me, as I had taken the advice of Eleni Tsiompanou, the integrative doctor at Penny Brohn, to stop running some time ago.Overall, it seems the benefits of a 5-minute run, match those of a 15-minute walk. Broadly speaking, it seems the benefits associated with a 25-minute run are equivalent to walking for 1 hour 45 minutes. Obviously if you are  young  healthy and reasonably fit, running is more time-efficient. Or is it? With running there is time spent getting changed twice and showering afterwards. (Assuming that you have a healthy attitude to personal hygiene) Plus, there is the  time stretching (before and/or after running) and maybe even cooling down. So a 15-minute run could, in reality, easily take an hour out of one’s day. This is  significantly more time than that devoted to say, a 45-minute walk (which, generally, will require no changing, stretching or showering) and you spend all the time outside!Runners may also be prone to injury. I know from first hand experience about this. When I used to run a lot, I had a succession of running related injuries (shin splints, right calf,  lower back, to name a few), which was one of the reasons which eventually led me to think about giving up running.Prior to my liver resection in February 2011, I had a personal trainer who was helping me get fit again, after a year of very gentle exercise. My aim was to run a 10km race and raise money for cancer charities. I was feeling great and beginning to enjoy the running. Then I was diagnosed with a metastasise in my liver. It required surgery. I had to stop the running while I recovered from my surgery.That March as part of my post op recovery, I went to Penny Brohn for a few days. During which I saw Eleni  Tsiompanou ( an Intergrative Health Doctor) and we discussed the subject of exercise and how much was advisable. I told her what my plans were and that I hoped to get back to running again soon. I was not expecting what she said. I remember her words “Running – no way – this is far too much for you. Walking – most definitely and as much as you like. But running no”.  I was confused!

Walking can be sustained all year and can be carried on as you get older. Walking is much easier and in my experience it is more conducive to ‘social networking’. Another advantage of walking is that it can easily be incorporated into one’s daily routine. My friends are of the age when going for a walk is not too off putting. I can’t think too many of my friends who would get excited by asking them to go for a 5km run. But a walk with Colin and me seems to be OK.

So I was excited by the good news that cancer patients can cut their risk of dying by up to half – simply by walking just one mile a day, according to experts. A study revealed physical activity as a ‘wonder drug’, with those diagnosed with breast and prostate cancers able to cut their risk of death by up to 40 per cent. Bowel cancer patients, need to double the walking distance to halve the risk of dying. The calculations are based on walking one mile at a moderate pace of 3mph, which would take just 20 minutes a day.
The research by Walking for Health, a network of walking groups run by Macmillan Cancer Support and the Ramblers, found physical activity can also reduce the impact of some debilitating side effects of cancer treatment, such as swelling around the arm, anxiety, depression, fatigue, impaired mobility and weight changes. The charity estimates that 1.6million of the two million people living with cancer in the UK are not active at recommended levels.
Ciarán Devane, chief executive of Macmillan Cancer Support, said: ‘Today’s research highlights the very simple reality – walking can save lives. ‘We cannot continue to turn a blind eye to what is a very simple and obvious solution. Physical activity is a wonder drug and health care professionals must prescribe physical activity, such as walking, as a standard part of cancer recovery.’

Thankfully I took the advice of that doctor at Penny Brohn. With the help of my new personal trainer, my doggie companion Colin, I walk every day. Whatever the weather he gets me outdoors for his walk and I have no choice but to accompany him.

My friend Ruth and her dog Jazz are most mornings our companions so it has become a social networking activity. I always feel better after the early morning walk and it changes the energy I woke up with. Instead of feeling sleepy and reaching for a cup of tea to wake me up I return refreshed and keen to get on with my day. Not all of us were ‘born to run’, but almost all of us were ‘born to walk’. !

So it’s walking for me ….. and I urge you to get walking now!